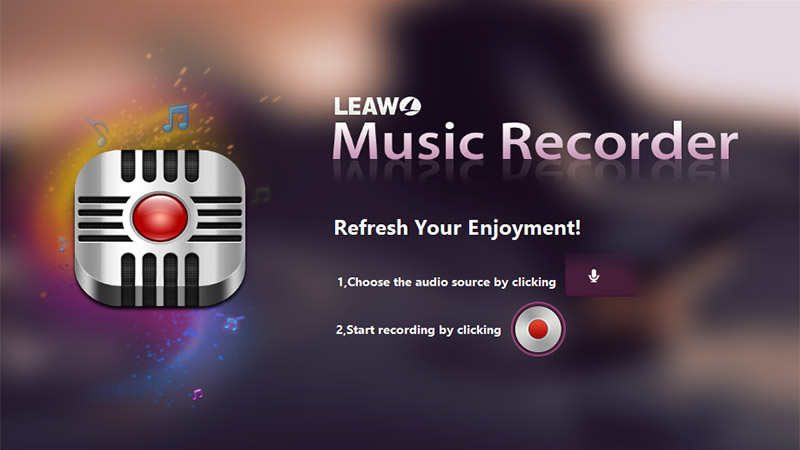 Audio recording software for Windows OS to capture streams or mic audio. An online audio recorder for online music sources like YouTube, AOL Music, Last.fm, etc. Technical support in English for valid subscription - the program continues to operate though after expiration. Free updates as well, and discount for return customers.

Leawo Music Recorder is a program for recording audio from a computer and audio output. With this software you can record music from such resources as Youtube, Facebook, AOL Music, Last.fm. The program allows you to record not only music but also any other sound on PC. So in addition to music, users can also record podcasts, radio shows and keep an audio diary.

In this review, we will see what functions Leawo application has, go through the settings and find out if they are relevant. At the end we will highlight the pros and cons of the Leawo Music Recorder and summarize whether the program is worth attention.

As you can see, the program is not too demanding on computer resources. Well, let’s look at Music Recorder features.

Let's start with the settings menu, which are located in the upper right corner of the screen. Turning to the settings, we see a small but useful set of tabs in front of us. We will consider all tabs and options one by one, and talk about each in nuance.

The first tab is General. In this tab, we have the opportunity to specify the path to save the recorded files, as well as select the desired language, which are four to choose from: English, Chinese, German and Russian.

Audio Source tab - here we are given the opportunity to select a recording source, having two options: Record Computer Audio and Record Audio Input. First one is good to capture audio from online sources such as: YouTube, AOL Music, Last.fm, Soundcloud, Bandcamp, Spotify and so on. The second one is to record audio from a microphone or other built-in audio tools, i.e. Realtek audio, digital input, etc.

Next, let's move on to the function we like in the Scheduler tab. It allows you to set the time, and at the specified time, recording will start automatically. It will be carried out from the source you’ve selected in the Audio Source section. You can also set the duration of the recording and automatically turn off the PC when recording is complete. It is convenient if you need to get away from the computer, while recording a radio broadcast or something else.

The next, no less useful function, Automatically filter, only save track longer than 10 seconds - does not save the record if it lasted no more than the time you specified. It is useful if there was some noise at the beginning of the recording and you immediately stopped recording, so you do not need to waste time deleting the file. We recommend setting 10 seconds, probably the best option.

Automatically get music info while recording - this function will help you save time, it will determine the tags and cover art for the file. In most cases this function does it correctly. There is the possibility to do it yourself manually in case something went wrong.

Format tab offers to choose file format and adjust it. Audio files can be saved in two formats: MP3 and WAV. In mp3 format, there is the possibility of choosing a bitrate of up to 320/Kbps, as well as a sampling rate of up to 48000 HZ. The higher the bitrate and sampling rate, the higher the quality and accordingly the file size, do not forget about it. When choosing the WAV format, there is no possibility to change the bitrate, here it will have a constant value of 1411/Kbps. The sampling frequency can be changed in the same way as in the mp3 format up to 48000 HZ.

In the Connection tab, you can configure the proxy server if necessary. Also in the program there is a pleasant opportunity to choose a design. You can change the appearance in the Skin tab. You can only choose from the proposed options.

On the Recording screen we have: a) Start/Stop button, b) buttons for switching between the recordings, c) Play/Pause button, d) playback display, e) volume slider, f) recent recordings (after restarting the program they disappear), g) the microphone icon (to quickly change the recording source), h) the clock icon (scheduler), i) the plus icon to add a playlist, j) links to developer website.

The next function of the program that we would like to focus on is the addition of recorded files to iTunes with one click. Undoubtedly, this is one of the advantages of this program.

The Media window contains all your recorded files. Let's start with the library and playlists. Initially, for our convenience, there are sections All Recordings, New Recordings, Recently Played. You cannot delete and rename these sections, and why do something with them, but you can play them and add them to the iTunes library.

In Media, the Add playlist icon becomes active. Created playlists can already be deleted and renamed. Also in the Media window, you can change the display of the window itself. It is also possible to sort files in one click by name, duration, artist, album, genre and date added. There is also a search bar, you can search by keywords or set a search filter. The following search filters are available: by name, artist and album. This is useful when you have a large library of files.

As you can see, the developer took care of your time and did everything for convenience. Files in the library can be edited, added to the playlist one at a time, or all at once, added to iTunes, in fact, the entire set of options can be seen in the screenshot.

How to make a recording in Leawo?

You need to click the red button and then launch the desired audio source - video, music online or on a device. As soon as the sound starts to be audible - recording begins. In the program window you can see time counting, bouncing columns on the equalizer and notes moving to the center. If the song title and album cover are recognized, it will all appear in the center square with the notes.

Once the recording is finished, it moves to the bottom row, and you can also open its context menu for editing. As promised on the developer's site, Leawo Music Recorder can automatically download and add music tags to recorded files, including title, artist name, album title and album cover, genre, year of release. For the vast majority of tracks, all tags are correctly defined.

It is a surprise that even the music from the movies recorded on the hard drive has been properly tagged. To view a list of all recorded audio, click on Media at the bottom of the window. The Media tab opens a library of created records. Here you can manage your recorded files, edit tags, create or delete playlists. Recordings in the library will be played one by one continuously, according to the playlist. If you do not pause, the list will start playing again and again continuously.

The function may not seem necessary to someone. Because, as we all know, Windows lets you record audio using the built-in feature. However, Windows software stores its audio in .WMA format, which is not played by all players. Leawo Music Recorder instantly saves our sounds in the right universal format with better sound quality.

In general, recording from a microphone has a certain charm to many creative people. It allows parents, for example, to read a fairy tale for children that they will listen to when mom or dad are away. One can record a romantic sound message for a lover, and even sing. It is always helpful for those preparing public speeches to listen to a speech on record to analyze its sound. Such users may benefit from Leawo Music Recorder nicely.

Leawo Music Recorder application is quite stable, we haven’t experienced any lags, bugs or crashes during basic operations (recording, playback, recognition). While recording audio, the program records sounds from a microphone or PC. When recording from a PC, all sounds played on your computer are recorded, no matter how loud or quiet the sound is. We’ve tried to record audio from YouTube, turning off the audio on the PC completely. This did not affect the recording quality and recognition function.

The recognition feature during testing has proven to act similarly to Shazam. Due to the fact that the Leawo product can read audio directly from the PC, you get clearer sound for the recording and analysis of the track compared to Shazam, which uses a microphone for recognition and is therefore forced to analyze the sound with extra noises.

We also ran a test to see if you could use Leawo Music Recorder instead of a media player. To do this, we moved a MP3 file into the folder with recorded files. At the same time, we took into account that the trial version of the program has a limit on the recording of the track at 3 minutes, so the downloaded audio file was also shorter than 3 minutes. This track was not displayed in the application library and was not playable. Conclusion - Music Recorder cannot be used as an audio player.

Leawo Music Recorder is a decent audio recording and managing tool, with all the key functions working properly. It has more pros than cons, and the latter ones aren’t too critical. This application will be helpful to audiophiles who’d not only like to listen to music but also to record own sounds or streams. Interface is to-the-point, nothing excessive, 4 languages to choose from.

Many users will also appreciate a feature to add recorded files to iTunes. Leawo consumes few system resources, making it possible to use on old/weak computers. During our in-house use and testing it never crashed or lagged, files were recorded and saved properly, scheduler proved to be precise. Overall, the program is worth attention. Our verdict is 4.5 out of 5.