Fast conversion speed, convert video to 1000+ formats. Download, edit, record, and compress video efficiently. Aicoosoft product is in use by global clients from more than 150 countries. The converting feature enables you to convert videos to any format you like - add one video or multiple videos into the program window. 24/7/365 customer service. 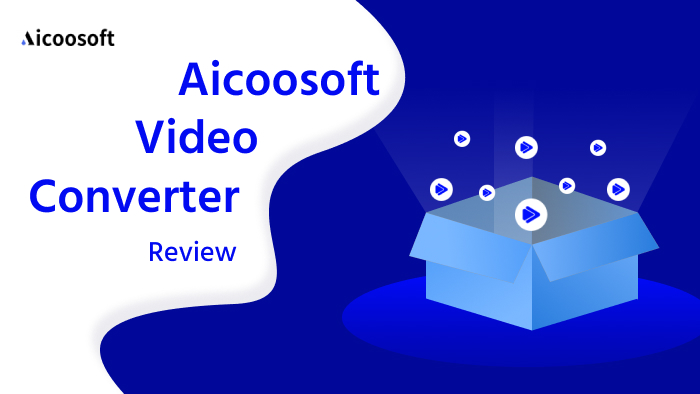 Aicoosoft Video Converter, or AVC for short, has emerged quite recently on the market of video converters. It is a multifunctional product, though first of all, a video converter with video and audio presets, as well as presets for mobile, desktop and other devices (game stations, e-book readers etc). Besides the converter, there are three other modules: Compress, Record and Download. Let’s start with minimum technical requirements to use AVC:

Unlike other video converters, all elements in the AVC interface are placed very compactly. The upper part contains tabs to switch between program modules. This arrangement of components allows users to use all 4 modules simultaneously, simply switching between them to create and control assigned tasks. The location of the additional toolbar is almost identical on all tabs.

Additional options are available at the bottom of the screen or by clicking directly on a file in the list. There is also a built-in player for previews. To access the program settings, you need to click on the inconspicuous button in the upper right corner. It provides access to reference materials, new updates check and licensed copy registration.

This is the main part of the program, and all other modules are linked with it. As a source file it can be a local file, a local copy of a DVD disc, IFO or ISO image. According to the vendor, Aicoosoft can work up to x30 faster thanks to acceleration technologies (multi-threading support, hardware acceleration using video card resources). Video files added to the queue can be merged into one file, even if they have different initial parameters. Note that the parameters of the output video will be the same as those selected for the first file from the list.

Getting started with AVC is easy. You need to add the video file to the list and select the output format. This is the basic scenario for using any video converter. But AVC has some features worth noting.

Despite the impressive list of supported formats, it is very convenient to edit basic presets in AVC. All settings of the selected preset are available on the right panel and can be customized at the user's request. This panel provides quick access to 8 audio and video properties, which we have combined into a table:

Click on the Edit button under the preview of a video,and open the AVC built-in video editor. There are 8 tools available, and they use AVC displays on the screen in real time. Trim - for non-linear video editing, allowing to trim, cut out or compile fragments. Crop - trims visible borders, ideal for removing black bars on 4:3 movies displayed on a 16:9 screen (or vice versa).

Subtitles - add static subtitles to video from files in SRT, ASS or SSA formats; edit font size, color, positioning. Watermark - upload a picture or a text inscription in one of 114 fonts, adjust transparency, position, etc. Effects - 9 effects in total, most of which changes the color scheme of the video. Audio - sound volume control, with the 4-fold amplification and removal of noise (noises) up to 30 dB. Adjustments - brightness, contrast, hue, saturation (255 values total). Rotate and Screenshot tools to finish things off.

This is the main characteristic for any video converter, so we checked it especially carefully. AVC can convert files to (or from) 23 video and 12 audio formats. It supports the most common MP4, MOV, AVI, and the more rare F4V, MXF and HEVC.

It should be noted that converting to GIF format is not available in AVC, but they can be placed as the source file. There is also no special feature for dividing audio and video streams into separate files, but this can be achieved by specifying the appropriate settings of the conversion.

Despite the small number of real popular media formats, their parameters can vary significantly in accordance to the target device. Customizing the settings allows you to successfully convert video into a format that will be acceptable for PCs, smartphones, game consoles and TV, in a total 30 devices types.

In AVC are 275+ presets, which contain pre-configured settings that will be optimal for a particular device. These include presets for social networks and video services (Facebook, YouTube, Instagram, Vimeo) and widescreen monitors (and TVs with HD, Full HD, 4K and 3D).

This module allows automatically reducing file size to an optimal value. Compression is based on an exclusive algorithm from Aicoosoft. It is known that file size is influenced by such parameters as format, codec, bit rate, screen size. The algorithm automatically selects optimal settings that will keep the balance between image quality and required size.

AVC can download videos from social networks (Facebook, Instagram), video hosting (YouTube, Vimeo), news (Fox News, DailyMotion) and 1000+ others websites. This feature automatically picks up the URL that was copied to the clipboard and scans it for existing videos.

If there are additional options, such as format choice, sound or subtitle, AVC will ask which file (or subtitle) must be downloaded. There is also a download history which saves even if the application was closed. One of the main advantages of this module is the ability to fully or partially download videos from the playlist URL.

A tool for recording live video from desktop screen, webcam or microphone only. Desktop recording performs statically and only in the selected area. Unfortunately recording of working windows of programs isn’t supported. However, a number of other recording settings are available here:

In this test, we have tested the functionality of the converter and the built-in video editor. The original file was Tears of steel in MP4 format. According to the test results, the conversion was quite fast with enabled saving (if possible) the original file parameters. Out of 5 attempts, only one attempt to convert MP4 to WEBM failed. The editor basic functions perform properly.

To test AVC's ability to find and download videos on pages, we selected several of the most popular sources of video content and tried to download it from there.

In the first part of the test, we performed only the minimal and maximal file compressions. On the second step, we tested Compressor+Downloader so we also added the conversion to AVI.

Users can purchase a license for a year (subscription) or for lifetime. All licenses are available only for one device and can be activated only once, with the exception of the Family License, which can be activated on three PCs at the same time. Also, their tariffs use the same prices for Windows and Mac versions. Here are more detailed characteristics of the AVC tariff policy:

In general, Aicoosoft is a good product in terms of functionality successfully competing with similar programs. The interface is dark, and the elements are conveniently placed at the edges. It’s a decent solution for non-professionals who often work with video and audio files. A full featured video converter accompanied by the editor and the web video download module. The Recorder can be used for tutorials or recording podcasts. Overall, Aicoosoft is definitely worth exploring.