The importance of backup software for any business entity could not be stressed enough. Especially in our turbulent times. A variety of data backup tools are there to safeguard data on computers, mobile devices, data centers. In short, these tools backup and store the data on laptop or phone in case it is deleted by accident or failure. We took most popular tools and put them under the microscope. They include both free backup software for private use and enterprise data backup tools for entire cloud servers, virtual machines and databases. All of them work on Windows of course, while some are also compatible with MacOS and/or Linux, and many of these tools are totally free as well. On this page you’ll find all their features comparison, and performance test results.

What is backup software?

Backup software are the programs that allow you to create full or partial backup copies of important files and systems. Modern versions of these programs support various backup algorithms to reduce space. The user can encrypt or set password access to critical copies, and upload them to various media, including the cloud. There are several reasons why you might lose important files:

Why do I need backup software?

Here are some facts:

The most important thing is that the program supports all 3 types of backups. You should also pay attention to the backup protection. Protection can be of three types:

Volumes. Splitting into parts is the process for the backup file to be split into several ones, with a smaller size. This is very convenient if you have a limited amount of free space or a small bandwidth channel.

Scheduling. Scheduling is a small but very important function for any backup program. This feature allows you to schedule and complete backup scenario at a specific time, without user interaction. You can also schedule regular backups, in case you forget about it.

Backup storage. From the operating system’s point of view, backup files are regular files, but you need to store them properly in order to use them correctly. The most common backup storage locations are:

With best backup software users typically are also able to choose specific file types to save. Devices sync options for backups, that some tools provide, is a top-level stuff. Find summary below.

This is the rule of creating backups, offered by Peter Krogh in "Managing Digital Assets for Photographers", which has spread to all areas of information storage. According to this rule, to ensure high reliability of information preservation, it is necessary to:

Acronis True Image is a paid software that is available for all major PC platforms: Windows, MacOS, Linux. AOMEI Backupper: a free software that has all the necessary basic functionality. Areca Backup is an open-source software which is distributed under the GPL-2 license. Ace Backup: a simple software that helps you create a copy of files in short time.

The analysis of the most popular data operations (using Google Trends) shows that the interest in backups never drops. Requests related to the creation of backups exceed requests for recovery, protection, synchronization and data exchange. It is worth noting that users are least interested in how to protect data, which, when creating large backup libraries, is a threat to their integrity and privacy. In terms of tools that seem to be most popular according to users' search terms, here's what we've found: 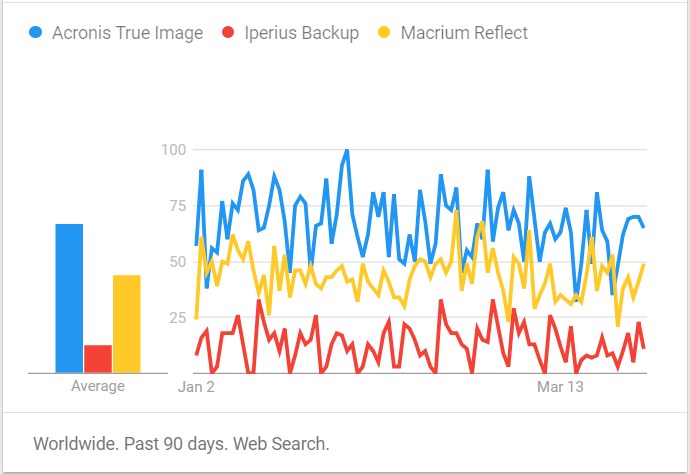 For final and main comparison test of backup software we created a 5GB size archive with files. We measured two prime features times - time it took to create a 5Gb backup and time it took to restore that backup. In addition, we also measured time for backup validation in those programs that provide this feature.

Iperius and Aomei ended up as the fastest for copying data, while FBackup and Acronis were the fastest to restore the entire archive. Find full comparison below. And of course, processing speed remains the matter of discussion in terms of relevance for backups as such.