Is Flutter Likely to Replace Java for Android App Development?

a month ago
4 min reading
0 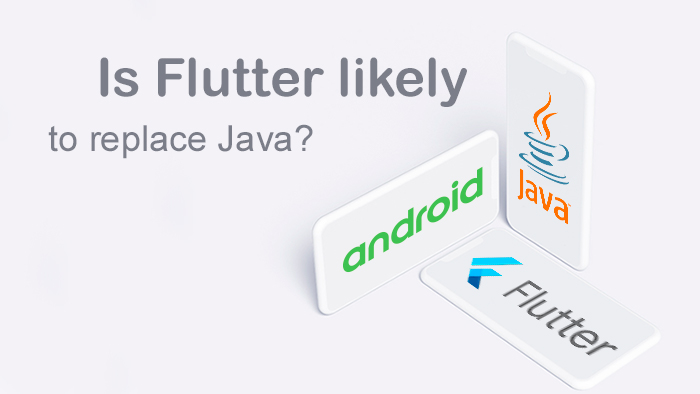 The landscape of the Mobile Application Development industry is changing. To get ahead of the competition, you need to up your game. It means moving away from traditional frameworks for newer, more advanced ones.

By advanced, we imply cross-platform mobile application frameworks that work across multiple smartphone platforms. There are plenty of platforms available for that purpose. Currently, Java is the platform of choice for many developers.

But there is a new competitor in the market: Google Flutter. With modern development practices moving towards dynamism, is it possible that Flutter will replace Java as the go-to choice for cross-platform mobile application development? In this article, we'll discuss the many benefits Flutter has over Java and the reasons it can and cannot replace the platform.

Before going into details, let’s look at an overview of the two platforms.

A framework for developing mobile applications, Google Flutter is open-source and facilitates Android and iOS platforms' development activities. The Flutter SDK (Software Development Kit) makes sure that the application you create is compatible with all web platforms.

Competing with Flutter is a language that’s aged well compared to its counterparts. Developed in 1995, Java is a cross-platform programming language used to create games, mobile applications, web applications, and more.

The thing that sets Java apart from Flutter is its age and established reputation. Over the years, the platform has been at the automating center of many-core industries and businesses. In the next section, we'll discuss the various benefits Flutter has over Java.

The Benefits of Using Flutter

Right off the bat, we're going to say that Flutter is young and needs more development before replacing Java. The android development industry requires a stable platform, and regardless of Flutter being a Google product, it requires upgrades.

But that doesn't mean the platform hasn't grown. If it were a stale platform, we wouldn't have been having this discussion. It’s revolutionary growth and constant development over the past couple of years has made it a force to be reckoned with.

Now, let’s discuss the reasons why Flutter is considered a potentially powerful alternative to Java:

QA testing conducted on Flutter reveals that it’s a platform with a shorter codebase. Compared to Java code, it builds applications with 1/3 of the code requirements. Given the rise of platforms like Python, which also has a shorter codebase, Flutter’s productivity is a breath of fresh air for developers.

Given three engineers and a month, you will get the first release of a Java application. In a similar scenario with Flutter, you get three releases. The amount of resources required and the level of productivity makes Flutter stand out when compared to Java.

While many would have you believe that with Flutter, you would have to develop a separate application for cross-platform compatibility. Nothing could be further from the truth. Flutter provides its users with the ability to create a cross-platform application through a single codebase. It allows the application you create to run smoothly and perform well on all platforms.

This is the primary reason why people now prefer Flutter over Java. It’s a high-performance alternative that streamlines and quickens the development life cycle in more ways than one.

By reducing project resources, the platform gets more work done in less time. For the bottom line of Customer Application Development Companies, this can mean more profit. Flutter has, without a doubt, proved to be an effective coding platform.

All of these factors give Flutter an upper hand over Java as a platform. However, it's still not ready to replace the platform. As a quick alternative to Java, it’s indeed a viable platform. But Google needs to up the ante if they wish to keep the platform performing well.

In the next section, we’ll be talking about the drawbacks of Flutter as a platform.

Flutter offers a myriad of advantages that much has already been discussed. Now it's time we move onto the next phase of the article, where we discuss the pitfalls associated with Flutter.

Over time, the apps you create look redundant in that they look similar.

While it’s focused on cross-platform devices, the application's look and feel lean more towards Android than iOS. It can prove counter-intuitive to your website operations.

For GUI, it uses the Dart platform for development purposes while saying that it provides a one-size-fits-all solution.

It’s an ever-evolving framework requiring more work and community support. Flutter is expected to rise to compete with both Java as a cross-platform and non-native platform like React Native.

While it does show signs of being a cross-browser application development kit, Flutter still has a long way to go. Several features need to be ironed-out before these changes are adopted.

Ease of use has been a significant concern for developers nowadays. It has been the trend since the aforementioned Python programming language. With so much for so less, the trend is likely to shift towards Flutter and other simple languages.

As an overview, this is what is expected of the platform in the future:

The final verdict? We think it’s pretty clear from all we’ve discussed above. In terms of innovation, Flutter is indeed a powerful platform. A powerful platform that can replace Java for Android development still has some features that need to be perfected before we move forward with it. Being in its infancy and past the beta version, this platform promises a lot in its small development. The upwards shift is good, but right now, Java is still the choice for developers.

Jibran Ahmed Sheikh is a WordPress Expert at B2BWoo. A Tech Fanatic by day and a reader by night, Jibran enjoys exploring the ever-changing world of Technology, Development, and eCommerce.