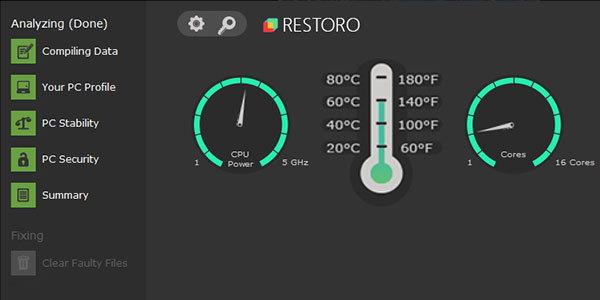 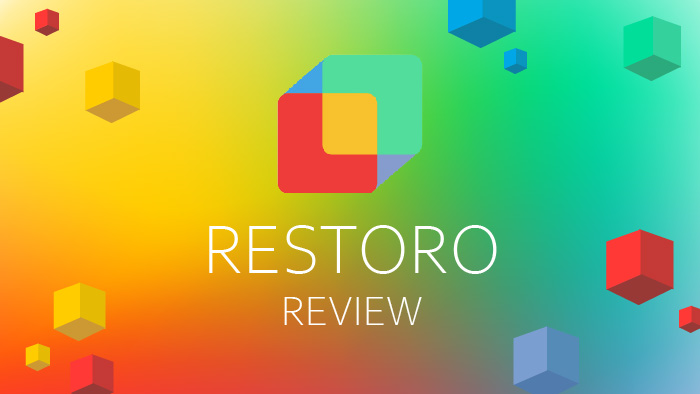 Over time, a decrease in PC performance is inevitable. Accumulation of unnecessary files and programs, the presence of viruses, and constant system errors could leave a negative impact on performance and reduce the longevity of your PC. To prevent this, one has to monitor its condition, and programs that can find and fix issues can be of huge help. One of those is Restoro.

The interface of Restoro is a simple window displaying features and all the actions taken. Right in the middle the window displays all current actions both during scanning and during repair.

On the left side in the Analyzing tab we see categories by which scanning and repair takes place: PC profile, Stability, Security, Summary. There is also a small menu (cog icon) with additional features and settings, such as terms of use, refund policy, uninstall instructions, etc.

The settings menu itself does not give control over the appearance of the program, but only allows you to change the notifications settings and access to real-time monitoring. In general, the interface is comprehensive and requires little effort on the user side.

It is clear that the first function is to scan the PC for all possible problems related to Windows errors, finding corrupt or damaged files, the causes of problematic operation, and the presence of viruses or programs that threaten stable operation. It is free. To access the following functions (i.e. the process of repairing itself) you need to purchase a license:

During the scan itself, there are 3 main categories in which Restoro looks for errors:

In addition, it should be clearly understood that the program can not fix 3rd party programs (programs that are not included with Windows OS, for example Mozilla Firefox, Adobe software, etc.). It is also not recommended to use the program as the main antivirus. Restoro is a tool to fix PC errors, not a means of protecting it.

For a more detailed and clear picture, we will test both scanning and repairs.

Scanning. The first thing the program will do at startup is to start the process of scanning your PC. The scanning process is divided into 5 stages:

As you can see, Restoro has found many errors in the system related to the registry, problematic programs, privacy settings and files to be deleted. The scan itself takes about 3 - 5 minutes.

Repair. As already mentioned, to repair you need to purchase Restoro and enter the license key. It is entered in the field in the form of a key at the top of the main window.

Immediately after entering the key, the program begins the repair process. Like the scanning process, it is divided into 4 key stages:

The whole repair process took 24 minutes. It should be understood that the number may vary depending on the configuration of your system, the presence of a large number of viruses, corrupted files, and so on. After the entire repair process, Restoro asks you to restart your PC to install all the necessary files.

Results. So, let's compare the changes in the PC before and after the Restoro repair.

It is necessary to notice that the data presented in this exact testing will fluctuate depending on a configuration and a condition of your system. For some the result will be almost imperceptible, and for others much greater.

Downloading and scanning your PC is free, but to repair the system you need to buy Restoro one of the available options:

In addition, there is a guarantee in the first 60 days of the ability to return the money.

Purchase is available both through a credit card (MasterCard, Visa, etc.) and through PayPal.

Restoro is an interesting software to optimize the entire operating system, increase performance, detect dangerous, unnecessary or broken files, replace them or destroy them. This set of functions in one program provides a wide range of opportunities to ensure the highest quality PC operation.

How to activate Restoro?

After the scan is completed, click on the key icon, next to the Restoro logo, and input the license key.

How does Restoro work?

It compares your operating system to a new and functioning operating system. Your own system is mirrored against our vast repository of system services, files, registry values, dynamic link libraries and other components of a fresh Windows installation.

Does the Restoro have system requirements and what are they?

Minimum of 512MB of RAM and a high speed internet access. You can run Restoro in safe mode to improve repair quality.

Which operating systems does Restoro support?

All Windows Operating Systems from Windows XP and above.

Can I use Restoro for macOS or Linux?

No. Restoro is for users with Windows XP and above.

Does the license key expire?

Yes, license keys expire one year from the date of purchase.

Do I need a license key if I only want to scan a PC?

No, a license key is only needed when you wish to follow through with the repair offered.

Does the repair process harm the applications that are already installed?

No. In very rare cases where an installed application has already been harmed by malicious software, you might need to reinstall that specific application.

Antivirus scanner found viruses in a Restoro quarantine folder. Why?

When Restoro detects viruses, it deactivates them and lays in a quarantine folder.

Can I use Restoro instead of antivirus?

No. Restoro is not an antivirus, but only finds and fixes errors that are already in the system. You need to use an antivirus.

Can I get my money back if the program did not work?

Restoro provides a 60-day money back guarantee after purchase.

Can Restoro collect information about me or my PC?

Restoro collects information that is used in the process of repairing your computer. It does not make copies of your programs or data files on your computer to perform the service, nor does it sell this information to third parties.

Both programs deserve attention. Both have features that the other does not have, the choice is up to the user.

How fast is the Restoro for Windows repair?

The length of the repair is dependent upon the repair scope, hardware and your Internet connection. Some computers will take longer than others. On average - about 45 minutes.

How do I run Restoro in Safe Mode with Networking?

Go to Start menu > Restoro > Run in safe mode, to do just that.

How is Restoro different from other PC repair software?

Restoro has exclusive access to a dynamically updated web store of fresh system components, which is used as spare parts for repairs. Restoro can also repair virus damage on your PC.