NetCut review: How to control your network

NetCut is a network monitoring tool that protects against so called “spoofing” attacks. Such attacks, also referenced as ARP cache poisoning, ARP poison routing (ARP = address resolution protocol), target LAN so that to gain access to IP addresses of computers within a network. As a result, the attacker could potentially intercept all data that goes through an IP address. Often such attacks facilitate other bigger attacks, DDoS for example. This is a threat of grave concern these days, this is very evident. Let’s find out more in NetCut review below.

NetCut is a type of software designed to protect networks from such vulnerability. It is not the only program in network security software, but it is one of the most popular, therefore this review was in order. We can say that NetCut (v.3.0.58, as of August 2019) is light and easy. It scans a network and displays all devices in it.

But most importantly, it detects spoofing attacks and attempts. It can work constantly in the background. You can launch scanning of a PC or a network with the app. Other options with NetCut include blocking Internet access for specific devices, viewing reports and history, detecting unknown (guest) users.

Try it for FREE

Go to arcai.com, there you will see 2 versions for PC – Netcut Defender as a desktop app, and Netcut v3.5, the newest version. The latter one has a more user-friendly web interface. Select which one you wish, download and install it. Note: do not forget to check the “Automatically start the WinPcap driver at boot time” option. 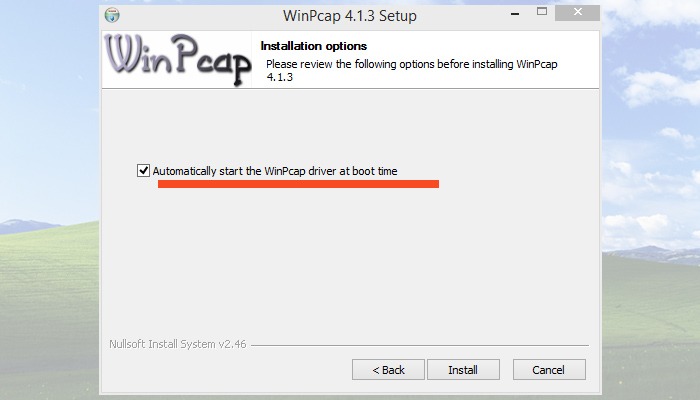 Run the program – this will open a page in your web browser. All the elements and the UI is simple and straightforward. There no themes or interface language to select – just dark-grey color and English. You will see several tabs: Users, Options, Pro, Records, Log. Below, a green or red status button indicates whether Netcut is On or Off at the moment. 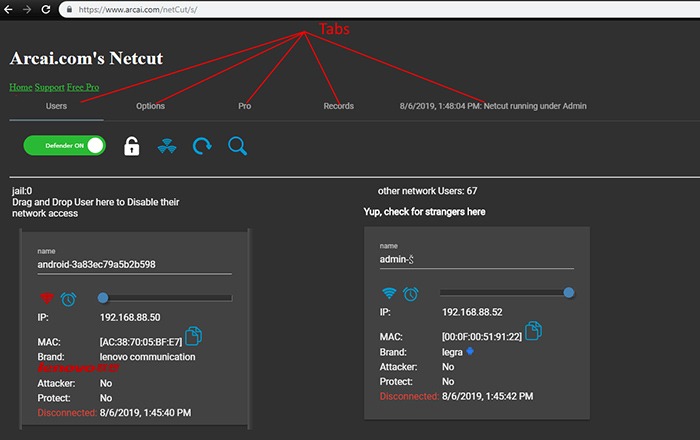 Lock/Unlock Wi-Fi is the first and essential feature in the Users tab. If On, no new users will be able to join the computer network, and won’t have Internet access. Also, note that this function is available in Pro version only. Next to it, you will see icons/buttons for Network re-scan, Block/Unblock all devices, Search, Schedule offline. 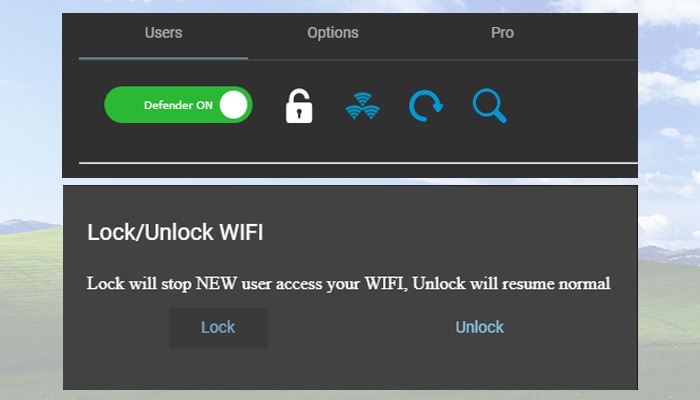 In the Users tab there are 3 columns: blocked (blacklist), other, trusted (whitelist). Admins are able to move items between columns, taking action by drag-and-drop. With scheduler admin could also set time period for users’ blocking, as well as turn on timer (in minutes). If you see the “Attacker” status for any IP or device in the Other column, certainly you would want to move it to the left column, actually blocking that IP. 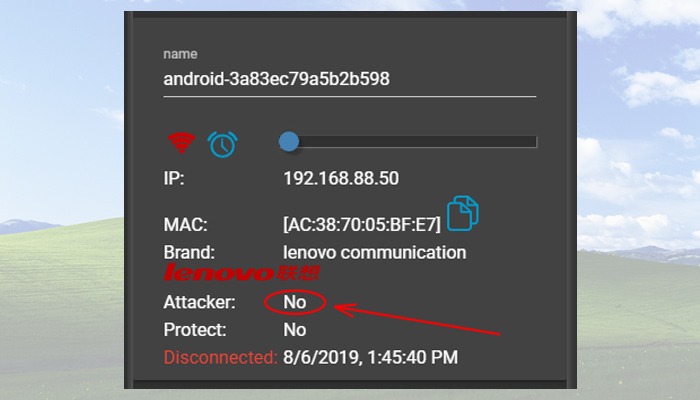 Protect status “Yes” means a computer has NetCut installed and Defender enabled. This would be positive, of course. “Options” tab is basically the settings – and all except one, “Cut affect gateway and user”, are available when Pro is purchased. The most useful setting is “Fake MAC address”, which allows random changes of the MAC address. The tab “Pro” is obviously for users to buy the subscription. There are 2 ways to sign up: email and Google account, and there are technical issues with email channel as it seems (no message with account activation link in the inbox).

In “Record” tab you will be able to view visitors to your network. Free version though only shows “guest” users with no details, while the Pro version will display lots of data: IP, time in and out, device name, location. Additionally, you’ll be able to lock such devices off. 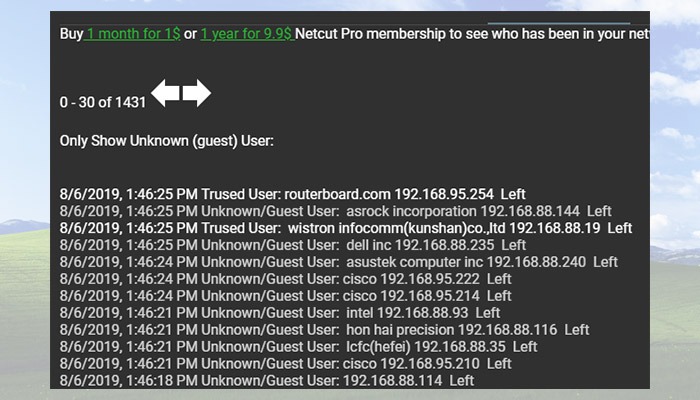 How to use NetCut

Here’s a brief tip on how to use Netcut step by step: 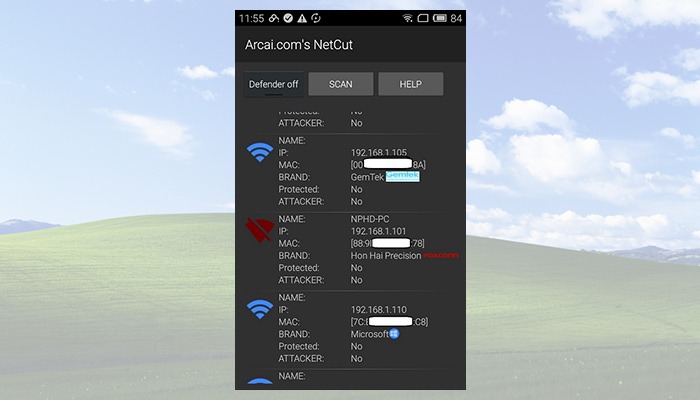 Cons: Interface is out of date Not changing IP when switching networks Account activation issues No auto scan in the users tab Ads in Free version

If considering NetCut alternatives with similar purpose or in similar “network security” category, we recommend to check the following software:

Q: What is NetCut?
A: NetCut is a program for monitoring computer networks and protecting them against ARP-spoofing attacks.

Q: What is Netcut Defender?
A: It is a protection program only. Basically, it is the same Netcut, except “cut off connection” feature.

Q: How to install Netcut?
A: Download and run the installation package, specify destination folder, install and reboot your PC.

Q: How to use NetCut?
A: Launch NetCut, click scan and wait for it to complete. Then select devices to block access, or the ones to restore access to the network.

Q: How to use fake MAC address?
A: Go to “Options” tab and enable the feature with a setting of your choice.

Q: How to add an item to whitelist?
A: Go to “Users” tab, scan the network, drag an item into the right column.

Q: How to turn on/off NetCute?
A: Navigate to “Users” tab, click the “Defender” button. If it is green then the app is active, and the opposite is red.

Q: Netcut is not working.
A: Check compatibility of NetCut with your Windows. If the OS is Windows 7, 8 or 10, then you need NetCut 3.5 version. Or try re-installing the app with admin rights.

Q: Is Netcut a virus?
A: Not that we are aware of.

Q: Is Netcut legal?
A: Yes, it is. Although, NetCut enables users to block other users, which could be used inappropriately, so legal issues might also be related to human actions.

Q: Can Netcut be traced?
A: No one will be able to trace it. There only could be suspicions and allegations.

Q: How to counter Netcut?
A: If someone uses with malicious intent, the same Netcut Defender could be your protection tool. Or any other similar software for ARP poison routing protection.

Q: Netcut for Android and iOS?
A: There are versions for Windows and Android only.

Q: How to protect PC from Netcut?
A: Look up “How to counter Netcut?” above